Accueil The Bayeux Tapestry – A Battle of Hastings timeline

A Battle of Hastings timeline

As visual aids to understanding history go, the Bayeux Tapestry, its home right here in Calvados, is up there amongst the most eye-popping artefacts in the whole world. Not far short of 1,000 years old, it gives us an epic retelling of events in English history’s most famous year – 1066 – when William Duke of Normandy conquered England at the Battle of Hastings and became known for ever thereafter as William the Conqueror, King of England. An incredible 70 metres long and 50 centimetres high, the most enlightening thing about the Bayeux Tapestry is that instead of just displaying the gory details of battle and the grisly fate of William’s opponent Harold, it gives us a complete and scintillating backstory, all neatly packaged into a Battle of Hastings storyboard.

The Bayeux Tapestry - What is the story depicted?

If you don’t already know the events shown in the Bayeux Tapestry, you might like to hear it in a nutshell first, and it goes like this:

Edward the Confessor, King of England, summons Harold, his brother-in-law and right-hand man. He’s sending him on a mission to confirm to William – Duke of Normandy – that he will become king on Edward’s death.

Harold sets sail across the Channel to Normandy. Whilst there, savvy William makes Harold take an oath of allegiance to say that he promises to recognise William as King of England when Edward passes away.

Mission accomplished, Harold sails back to England but when Edward does take his last breath, Harold has himself crowned instead, thereby going back on his promise to William.

The news reaches William who decides to set sail for England to make his claim to the throne. Harold must be punished!

And (SPOILER ALERT!), the famous fighting that follows between William’s troops and Harold’s, becoming known as the Battle of Hastings, ends badly for Harold, who is killed care of an arrow to the eye on October 14th, 1066.

William has sealed his place in history as conqueror and goes on to become the King of England.

The Bayeux Tapestry - Why is it so important?

Unsurprisingly for a story told in 58 numbered steps, the action-packed narrative is a bit more complex than our pocket version, with a great deal more woven scenography provided by Harold’s adventures and misadventures in Brittany and Pas-de-Calais, William’s epic preparations for battle after landing in Sussex, landmarks such as Mont St Michel and Westminster Abbey, and even a dramatic flashback or two! It’s little wonder the display has become one of the most precious Unesco-listed places in France and highlight of Normandy tourism, serving to show us its version of events in 1066. And happily, for historians, and for the simply observant and curious, it tells us much more than just the ins and outs of the story of how William Duke of Normandy became William the Conqueror – there’s also a treasure trove of vivid giving us valuable insight into the clothes, food, transportation, craftsmanship, beliefs, weapons and lifestyle of the day.

How old is the Bayeux Tapestry?

We can’t be sure of an exact date but the detail of the visuals is so closely aligned with contemporary sources that it can be assumed it was made in the 11th century. 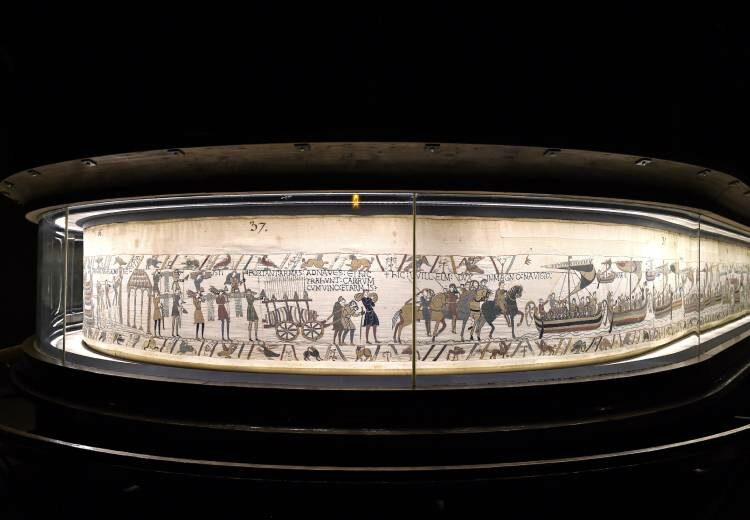 Who made the Bayeux Tapestry and who did they make it for?

It is thought to have been commissioned by Odo, William’s half-brother and Bishop of Bayeux, and crafted in English workshops in Kent.

How was the Bayeux Tapestry crafted?

Now here’s the funny part. One of the most remarkable things about the world’s most famous tapestry is that it’s not actually a tapestry at all! By definition, a tapestry is woven on to a loom, whereas this is an embroidery because it’s the technique of wool being stitched on to linen. It’s hard to imagine the skill and patience required for such a vast and detailed embroidery.

Why was the account made in picture form and not simply written down instead?

The reason that this Battle of Hastings narrative is in picture form rather than in writing is so that the people who were living at the time could all understand it. Remember, not everyone could read back in the 11th century. Think of it as a medieval comic strip!

Intriguingly, some of our questions may never be answered. Who knows, for example, why we never actually see William the Conqueror being crowned? What’s the significance of Edward touching hands with another figure, thought to be Harold, in the death-bed scene? Many aspects are widely open to interpretation and it’s thrilling to think that some of the little eyes seeing this historical artefact for the first time may squirrel away their William the Conqueror facts and Battle of Hastings facts and go on to become the historians of the future!

Visiting the Bayeux Tapestry - It’s definitely one for the bucket list!

Thanks to digital developers working behind the scenes, you can now see the whole of the work scene-by-scene online, but nothing replaces seeing the real thing in all its 1,000-year-old authenticity. Walking into the dark tunnel in which it’s housed is truly like stepping back into the most thrilling time-travelling portal. 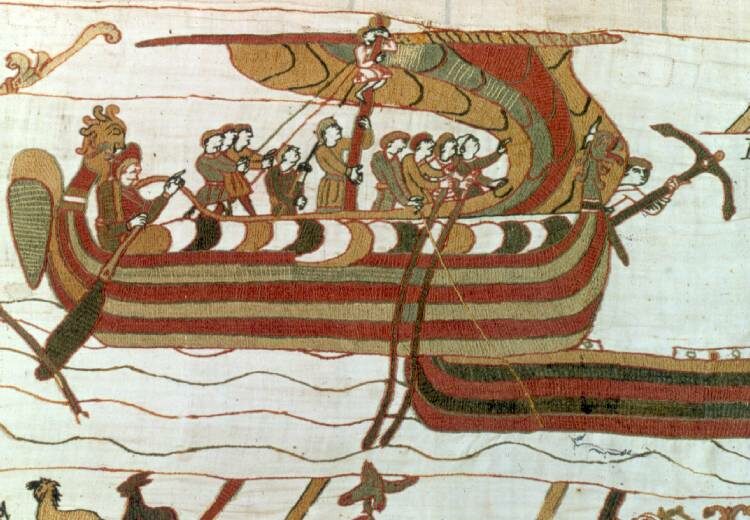 One last word on the Bayeux Tapestry…

If you like a final twist to your tales, you’ll also be intrigued to hear that there’s a second captivating timeline waiting to be explored, and that’s the ongoing story of what’s happened to the Bayeux Tapestry over the centuries. Fire, Revolution, Napoléon and a sprinkling of good fortune have all played a part. Discover the whole timeline in the display rooms above the tapestry, along with a chance to see a fascinating 16-minute William the Conqueror film all about the history of the Battle of Hastings and the Tapestry.

You’ll find the Bayeux Tapestry in the town of Bayeux, only a 20-minute drive from the famous D-Day beaches, close to where the ferry arrives from the UK, and only 2.5 hours by train or car from Paris. We’ve bundled everything you need to know about visiting the Bayeux Tapestry here. 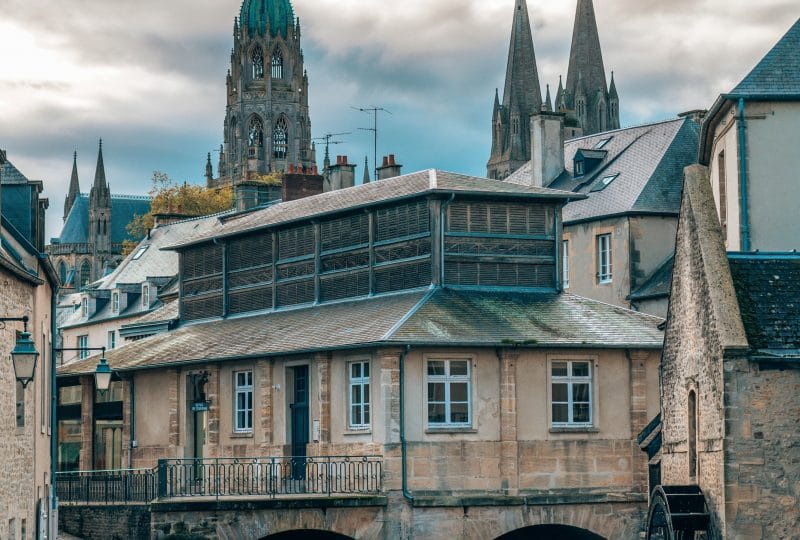 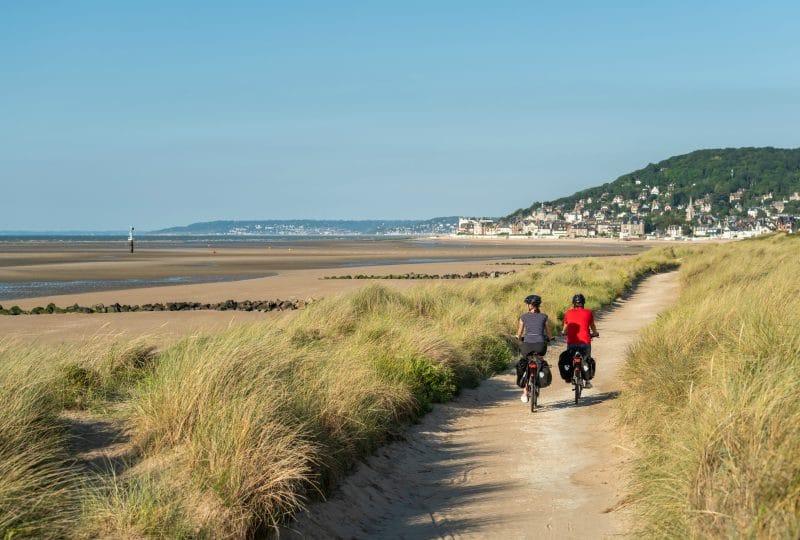