When the ‘D-Day Beaches’ are referred to as a pivotal point in WW2 history, there really couldn’t be a truer word said. It’s on these beaches that an epic day of daring sacrifice and comradeship unfolded like no other, the ‘day’ in question 6th June 1944, when British, Canadian and US troops together made a surprise attack on German forces landing on the coast of Normandy in France.

The overall strategy – codenamed Operation Overlord – was complex, the aim simple: to overpower the enemy and in doing so liberate France, and then Europe from the brutality of Nazism. In the bloodshed that took place on the shoreline, on the cliffs and then further inland – a long struggle that became known as the *Battle of Normandy – the Allies were able, little by little, to help bring about the end of the horrific and deadly war 11 months later.

Why did the Allies choose Normandy for the D-Day landings?

Plans for this most secret of missions were being discussed as far back as 1943. Allied leaders knew that to ultimately defeat Hitler they’d have to get a foothold onto mainland Europe. But where? Well, imagine a strategy a little like a football match: if you think your defenders are clustered in a certain location, you swerve to attack elsewhere – and this was precisely the plan.

With German leaders anticipating an attack via the narrowest stretch across the Channel to France (the Dover strait), their defences – known as the Atlantic Wall – were strongest around Calais. Better then, thought the Allies, to catch the enemy off guard. Why not leave evidence of a fake army in the south-east of England (to give the illusion that they’re about to attack from there), but instead mobilise the real troops and a vast armada further west on England’s coast, to target the less likely location of Lower Normandy’s beaches.

Why did Normandy’s D-Day Landings take so long to plan?

The pressure for the Allies to succeed in their D-Day beaches mission was immense – the outcome of the whole war depended on it – so precision and training were key. Consider too the scale and complexity of such an operation: 5,000 ships and around 156,000 troops – with the vast array of materials (tanks, artillery, provisions and so on) that they would need to continue the onward fight.

Though these numbers are vast, think of each individual soldier crossing the Channel overnight on 5th June 1944, ready to attack early morning on the 6th. Each had a face, a name, the weight of the world atop shaking shoulders and unimaginable emotion contained in the tight clutch of a prayer card or photograph of a sweetheart. 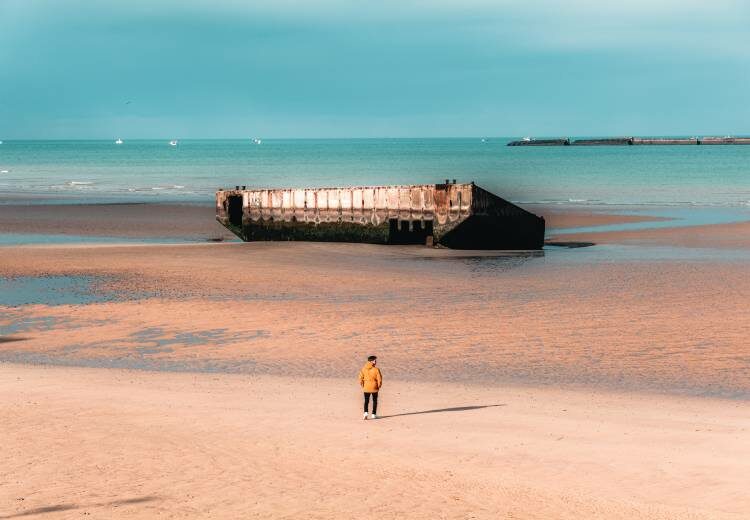 The objective of D-Day was to take control of railways and bridges, break down the communications and reinforcements of the enemy, and push them back. Allied Rangers parachuted in overnight to secure strategic points at the far west and far east of the 50-mile D-Day beaches front; bombers and battleships aimed their fire at German defences; and a staggered landing of troops arrived on five target beaches, each with a codename.

Utah Beach, around Sainte-Mère-Eglise, where US troops landed at 6:30am

Omaha Beach, around Colleville-sur-Mer, where US troops landed at 6:30am

Gold Beach, around Ver-sur-Mer, where British troops landed at 7:25am

Juno Beach, around Courseulles-sur-Mer, where Canadian troops landed at 8:00am

Sword Beach, around Lion-sur-Mer, where British troops landed at 7:30am

Of course, the enemy resisted, and the resulting horror – Allied soldiers swimming ashore amidst heavy fire and facing deadly obstacles such as mines, barbed wire and gun pits – a sea of bodies was the painful toll: 11,150 Allied soldiers either killed, wounded, missing or taken prisoner on that one day alone.

Some D-Day beaches were harder to capture than others. Whilst on some beaches Germans surrendered quickly, enabling the Allies to advance, other beaches saw strong resistance, with fighting persisting until evening.

Despite the scale of tragic loss, by the end of D-Day, the operation was considered a success, the link in the chain of the Germans’ *Atlantic Wall finally broken. 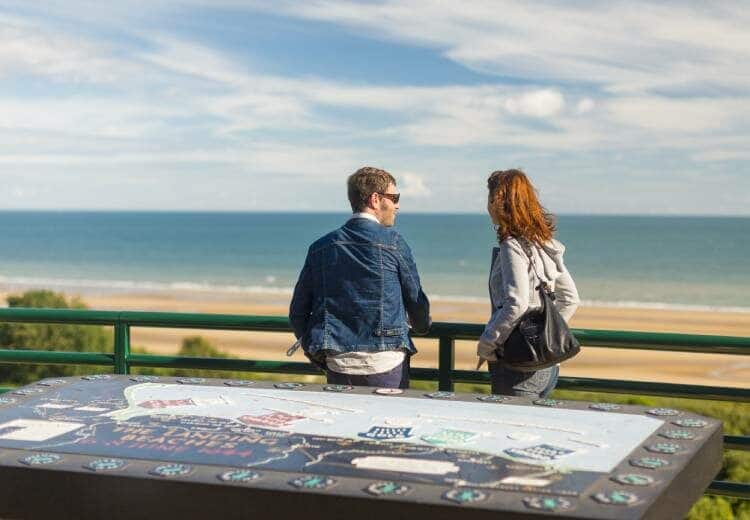 Though what happened in Normandy has long been depicted in dramatized D-Day movies, D-Day documentaries and WW2 history textbooks, nothing replaces the experience of seeing the beaches for yourself, finding out about individual soldiers, and paying your respects where it all happened. Only a 3-hour drive from Paris, or with a ferry crossing from the UK delivering you right to the heart of the Normandy Landing Beaches, all of the commemorative D-Day sites in Calvados are easy to reach.

So, whether D-Day is part of your studies, you’re researching an ancestor, or you’ve been moved enough to want to learn more about the Normandy landings, you’ll find a site dedicated to each and every aspect of this complex story. We’re pretty sure you won’t have time to do it all, so why not follow a themed trail, book a D-Day tour, or create your own visiting formula, such as 1 museum + 1 monument + 1 cemetery + 1 beach + 1 cinema 360 experience. That way you’ll get the bigger picture but avoid Overlord overload!

Go to a D-Day Museum

Head to a D-Day museum for the detail. If you can only do one, the Memorial in Caen is the flagship WW2 museum.

Go to a D-Day Cemetery

Go to one of the military cemeteries, such as the US Cemetery in Colleville-sur-Mer not just to see the scale of the D-Day casualties but for the stillness. The young ages of the soldiers and the personal epitaphs will be one of the most moving aspects of your D-Day tour and can be a gateway to finding out more about a soldier’s personal journey. 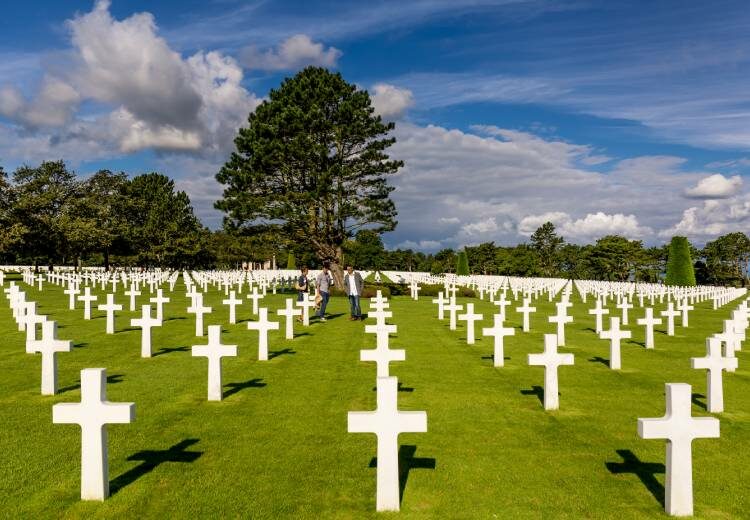 Go to a D-Day Monument

Go to a monument, for example the astonishing British Normandy Memorial in Ver-sur-Mer, for the majesty and grandeur of seeing soldiers immortalised for eternity.

Go to a D-Day movie experience

Go to a 360 Cinema for the immersion of surround-sound original footage. A powerful experience awaits at Arromanches-les-Bains.

Go to a D-Day Beach

And of course, go to a beach and simply close your eyes. The contrast between the calm of the sands and the violent onslaught that took place here makes for a powerful moment. Some beaches and cliffs still have stark reminders of D-Day, such as the German battery at Longues-sur-Mer and also the remains of the Mulberry Harbour at Arromanches-les-Bains; incredibly, without a much-needed harbour on this coast, the Allies brought their own!

Time your trip to enjoy the annual D-Day Festival: vintage vehicles, 1940s bands, re-enactments, parades, fireworks, picnics and a whole host of other commemorative events tied in with the anniversary of D-Day in early June.

Are D-Day and the Battle of Normandy the same thing?

No. D-Day only refers to one day – 6th June 1944 – and was just the beginning of the Battle of Normandy which lasted a whole 100 days until the whole of the region was liberated. There were moments of great joy during the Battle of Normandy as French civilians celebrated the Allies’ arrival, yet great sadness as so many lost their homes and lives during the fighting, with many towns and villages left devastated. 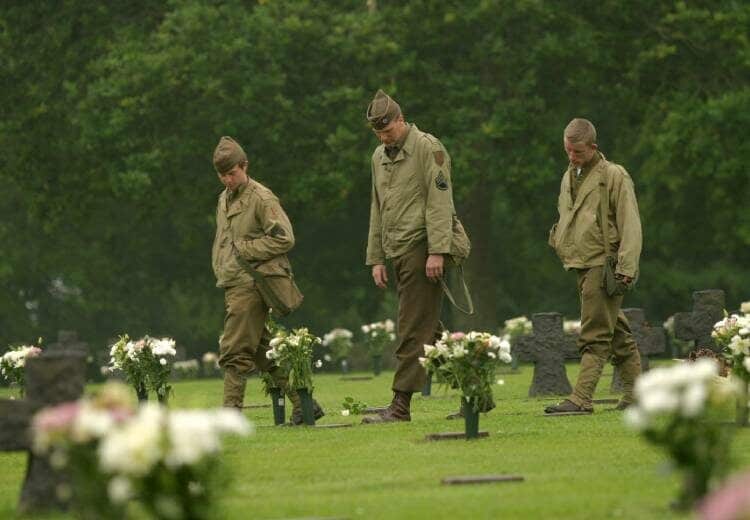 How did the D-Day beaches get their names?

Of course, Utah, Omaha, Gold, Juno and Sword are not the real names of these French beaches! They’re code names, mainly to keep plans secret from the enemy, but also to make names easier for the Allied forces to remember and pronounce!

Which of the D-Day beaches suffered the worst Allied casualties?

It was Omaha Beach, becoming known as ‘Bloody Omaha’ for its heavy death toll. Faced with an onslaught of German bullets and shells, around 4,000 men were killed or wounded on Omaha.

What does the ‘D’ in D-Day stand for?

The D-Day Landing beaches and the Battle of Normandy

Arromanches on the D-Day Landing beaches in Normandy 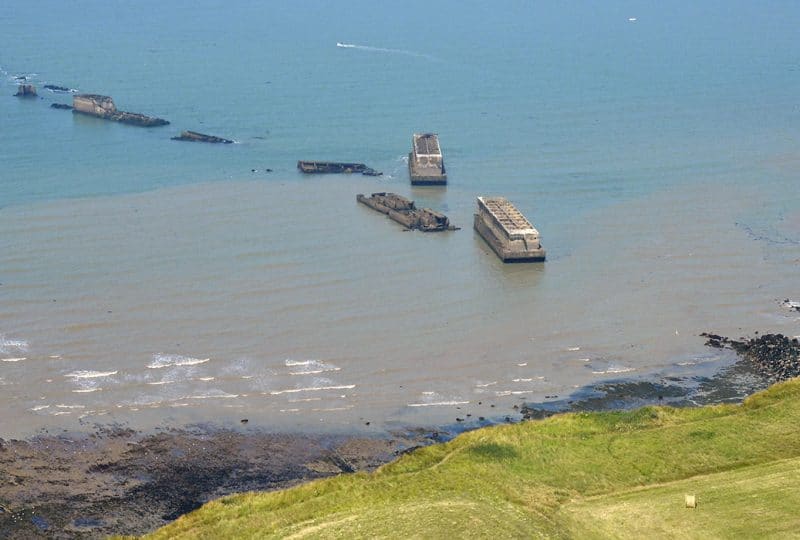