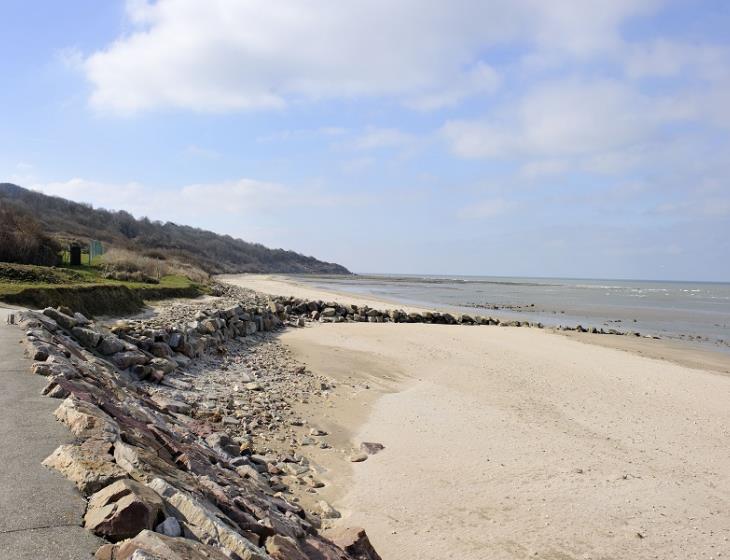 1. Departure from the Tourist Information Office of Villerville. Follow the Route du Littoral in the direction of Trouville-sur-Mer.

2. Take the Chemin des Terrois on the left, after the stadium, and go up the hill for 800 m.

3. At the intersection, follow Chemin des Terrois on the left, then turn right onto Rue Lucien Coutaud.

4. At the look-out post, turn right onto Rue du Bas Couyère. Continue straight till you get to the look-out post. The look-out post is a military property. It was built in 1910 and was occupied in 1940 by German people. It is currently used to monitor the ships sailing on the Baie de Seine coast in the direction of Rouen, from Ouistreham to the Pont de Normandie.

7. A few meters before the end of the path, take the Rue Moulière situated close to the Manoir de Clairefontaine, then cross the Route du Littoral to reach the Chemin des Moulières.

8. Continue straight and take the stairs leading to the heights of the cliffs, then turn right. According to the legend, the Creuniers fairy lived here. It seems that she followed on the sea the terrible giant Rattir to end his misdeeds and transformed him into a rock by the wave of a magic wand.

9. Walk along the Roches Noires Cliffs, then go down to the beach from the Parc des Graves. Cross the Park. It has 800 m of pedestrian paths stretching along the cliffs that offer a clear view on the Villerville coast. This Sensitive Natural Area has a rare variety of flowers, as it used to be an ornamental garden.

10. Once reached the Lavoir car park, you’ll be in the city centre.